Life Lesson of an Excellent First Graduate of UST 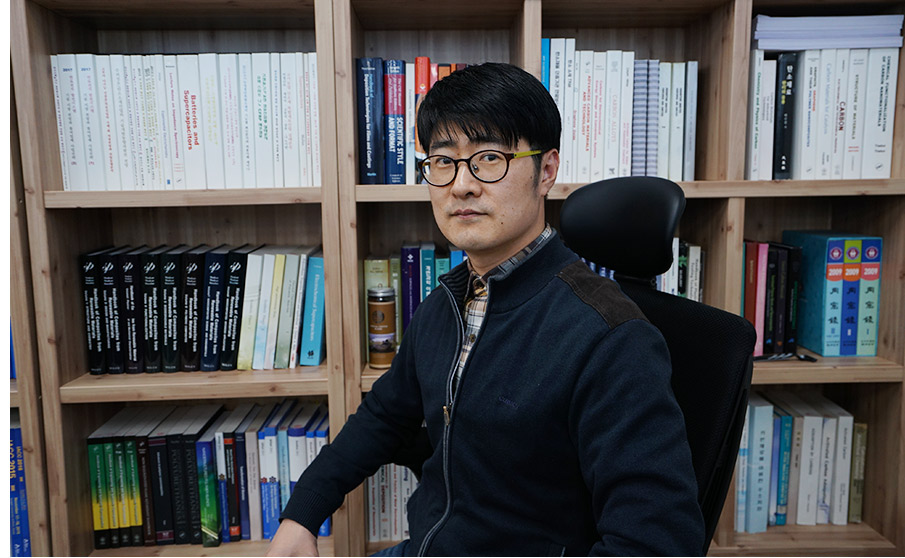 Life Lesson of an Excellent First Graduate of UST

It was 2003 when the Korea - Japan World Cup fever was still hot. Kim Byeong-joo, who studied for a master’s degree in the Research Institute of Chemical Technology (KRICT), heard an unfamiliar name--UST. He said his advisor recommended a doctoral course in UST to him, who was preparing for studying abroad. Introducing that UST was a national research institute graduate school, the advisor said Kim could study in the government-funded research institute campus. That is how he became the first doctoral student of UST. 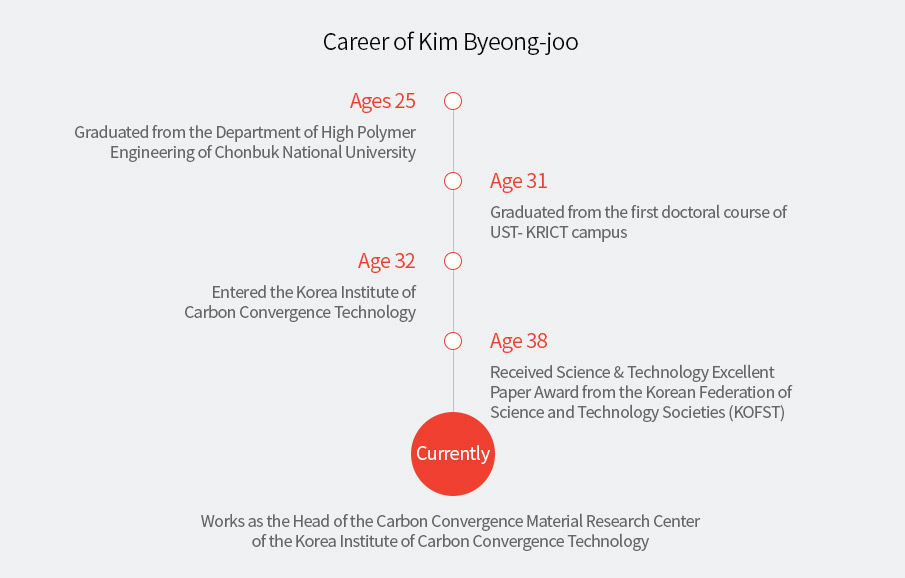 I Really Worked Hard! I Do Not Regret

Alumnus Kim Byeong-joo, aged 42, who currently works for the Korea Institute of Carbon Convergence Technology, began to recall his interview. It’s been 15 years since he entered UST in 2003 and graduated in 2008. He replied frankly to the question about why he chose UST, which was quite unfamiliar at that time. 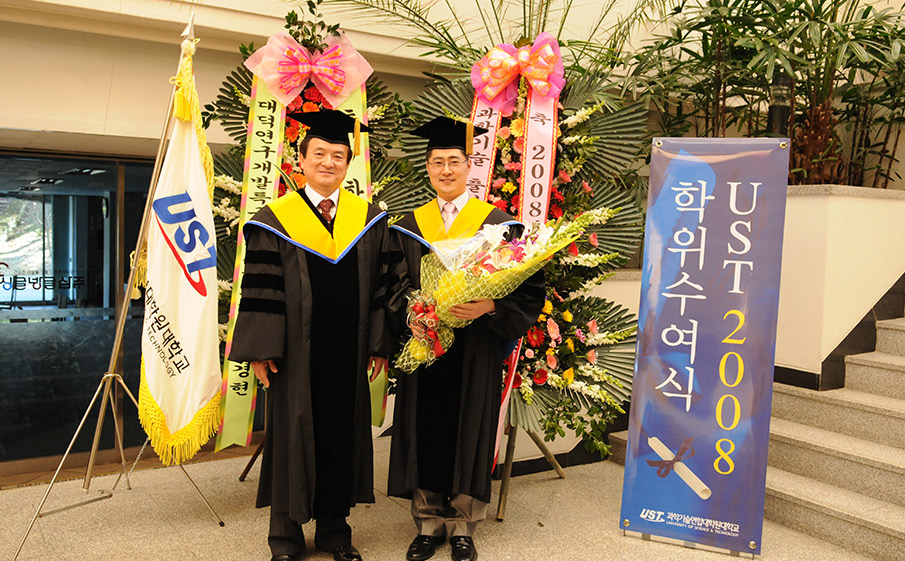 With president at UST graduation ceremony

“I thought I could become a researcher of the KRICT if I studied hard,” says Kim. “So I really worked hard. I published over 30 papers and patents during the 4 years of my doctoral course. My immersion was such that I was irritated if somebody talked about meaningless things. My mind was crowded with only research.” 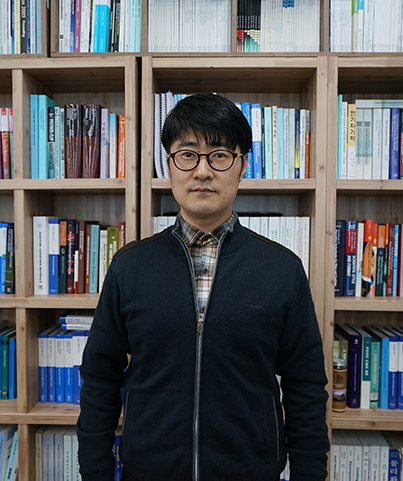 He was so absorbed in research that fellow students called him “irritable king,” but because of his commitment, he graduated from the first doctoral course of UST with excellent grades. His expectation to become a researcher in the campus where he studied was increasing. However, things did not work out as he wanted. He even felt sorry that his friends from other campuses were hired as researchers in UST. 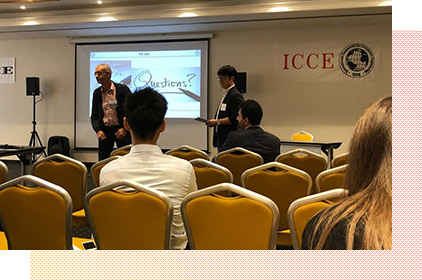 Then one day, his advisor delivered good news that Jollabuk-do established the Korea Institute of Carbon Convergence Technology and employed carbon material-related personnel. He was confident because he studied carbon material in UST and gained robust knowledge on the subject. Like that, he entered the Korea Institute of Carbon Convergence Technology in 2008 and has been researching carbon materials such as carbon fibers, activated carbon, synthetic graphite, and nano carbon for 10 years.

“If the period when I studied in UST is counted, I’ve been studying carbon materials for almost 15 years,” he says. “As eco-friendliness has recently become a social issue, the use of carbon fiber to lighten vehicles and activated carbon in fine dust filters have gained widespread attention. Manufacturing and analysis & application technologies of carbon materials that I learned in UST were very helpful in my workplace.”

He said that after entering the Institute, he often heard “where is UST?” when he said that he graduated from UST. Now, people are well aware of UST and recognize the ability of the graduates of the school. That is why the first graduates of UST were considerably anxious. Kim said one friend who entered the UST-KRICT campus together with him quit the school in just six months.

“Back then, the 1st UST doctoral course friends got together often,” he recalls. “They were usually friends who studied in the research institute in Daejeon. I still remember Doctor Kim Dae-won who studied UST-KRIBB and Doctor Min Hye-geun, who studied in UST-KRISS. They were all very proud. They thought in a way like ‘OOO school, where I belong’ not ‘I who belong to OOO school.’” He continues, “That’s why they adapted well to UST and pursued their careers smoothly.”

Although it’s been over 10 years, he remembered the names of his friends clearly. He said he particularly remembered that they organized an English club and after making a request to the school, were able to take the class together although they were on different campuses. There is a saying that birds of a feather flock together. Then does Kim have high self-esteem too? He smiled and said, “Yes.” He said he could study hard because he was like that.

“I graduated from Chonbuk National University,” he says. “It’s not a prestigious university. And I attended UST when it was little known. But I studied hard regardless of the school’s reputation. Especially, I led the creation of a network with researchers emphasizing the strengths of UST. I am still in touch with the researchers I got to know then. Sometimes, we work jointly. In retrospect, the experience in UST means a lot to me.”

At an international conference

Currently, Kim Byeong-joo is the head of the 25 members of the Carbon Convergence Material Research Center. Now, he is recognized for his expertise in carbon material field to the point that he is considered first when it comes to carbon material. However, he is not complacent. He continues to study and perform research, saying that researchers should not be lazy. He said he wanted to tell his junior colleagues what his advisor said in his days at UST.

“Some people pick up a shining thing even in a sand field,” he says. “I was strongly shocked when I heard this. If you give off brilliant light, you will be good wherever you are.”