Life as a researcher, What matters is the basics 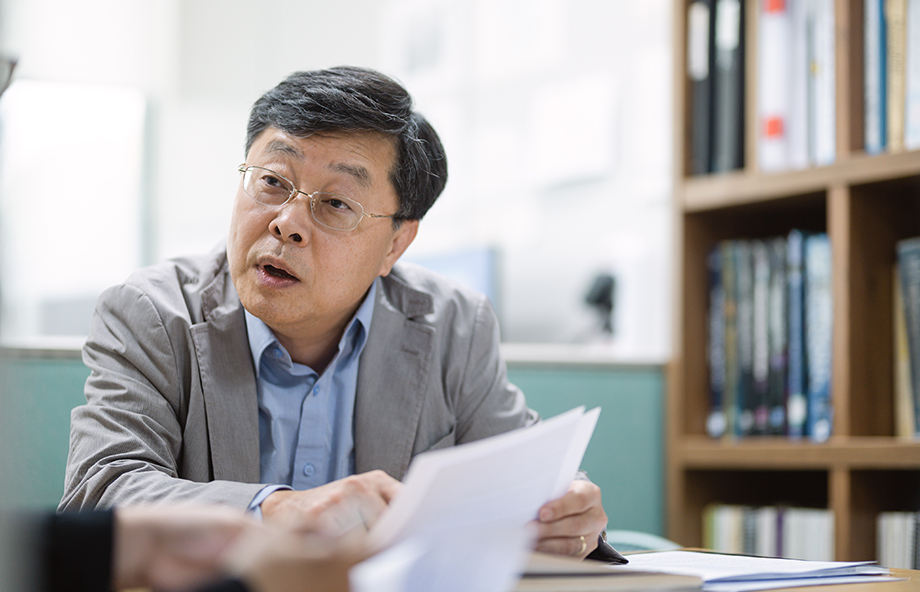 Life as a researcher, What matters is the basics

Severe eating disorders and resulting weight loss are one of the typical symptoms experienced by cancer patients. These symptom not only pushes the patient into extreme pain but also takes the power to overcome the disease away, resulting in lower survival rate. The problem is that the cause of eating disorders in cancer patients has not been identified up until now. A research team led by professor Yoo Kwon at UST-KRIBB School discovered a mechanism by which a specific protein (Dilp8/INSL3 peptide) secreted from cancer cells regulates appetite control hormones through specific receptors (Lgr) in cranial nerve cells. We have accomplished the results of identifying. This achievement was published in 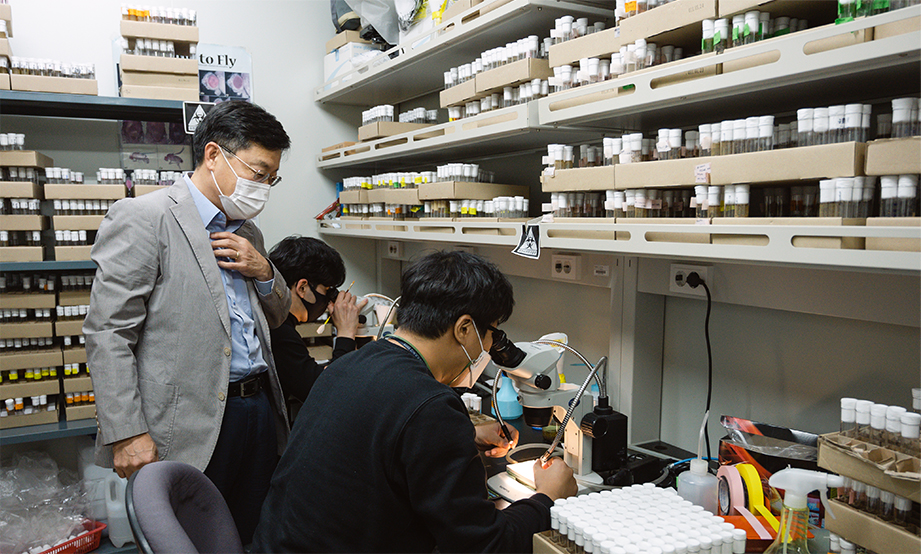 The outcome of 20-year research, published in [Nature Cell Biology]

'Substances secreted from cancer cells control and suppress the patient's appetite.' This is a hypothesis that Professor Yoo established when he started 'A study on the phenomenon of controlling the appetite-regulating hormones of substances secreted from cancer cells.' 20 years have passed from hypothesizing to discovering a peptide called INSL3 that actually performs such a function and clarifying the phenomenon. During the long time of 20 years, an enough time to witness a significant change around us, we were able to achieve good results thanks to the efforts of the research team including Professor Yoo, who took a step by step even when hard moments came during research.

“I have been working at the Korea Research Institute of Bioscience and Biotechnology since 2001 and have been conducting research on neuropeptides and metabolic diseases for 20 years. I haven't done this research alone, but it can be said that this research is the most important research topic for me. This thesis is a “precious outcome” that summarizes my research over the past 20 years.” 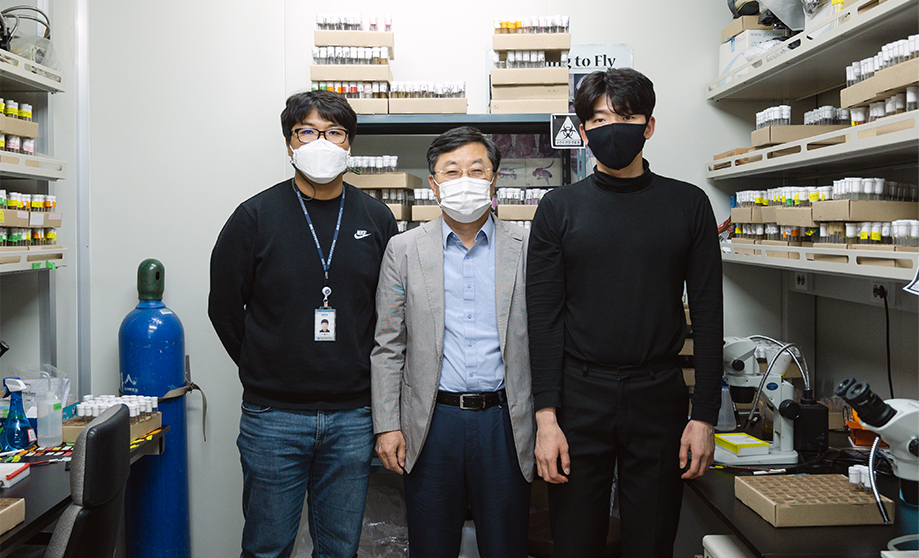 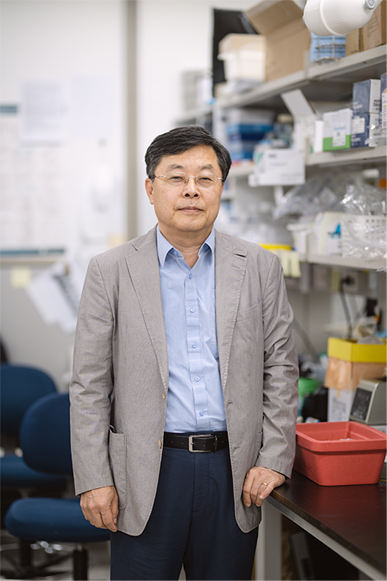 There are three students who are taught by Professor Yoo. Those students played their role well to make this achievement possible. In particular, it is said they have contributed greatly to the production and experimentation of mutations, which are essential processes for research.

“To understand the function of a gene, it is essential to break the gene, make mutations, and compare them with normal genes. But the process of making and experimenting with mutations is very complicated. UST students worked hard. Not only my students, but also student Kwon Dae-woo who is advised by Professor Lee Gyu-seon, played a big role. I cannot put the roles and efforts of the students in a few words, but I admit that they have been doing this for years, which require patience.”

In particular, it is said that student Ryu Tae-hoon have contributed as a co-author to a paper published in

‘Power of the basics’, the only thing I want to tell students

The only thing Professor Yoo wants to emphasize to his students is the 'power of the basics'. If we do not have a strong basis, we do not have the capability to move forward. Eventually, we won't be able to do in-depth research.

“I am pursuing quality research. That's why I tell UST students that they also need to produce high-quality research results. To do that, you need to have a strong basis. You must constantly study the latest thesis based on acquiring basic knowledge in order to understand your major and deepen your research subject to derive superior research results in qualitatively. If the basis are not strong, you can only study superficially. If a person thinks that he/she knows well about the subject without a strong basis, he/she will become a fake expert.” 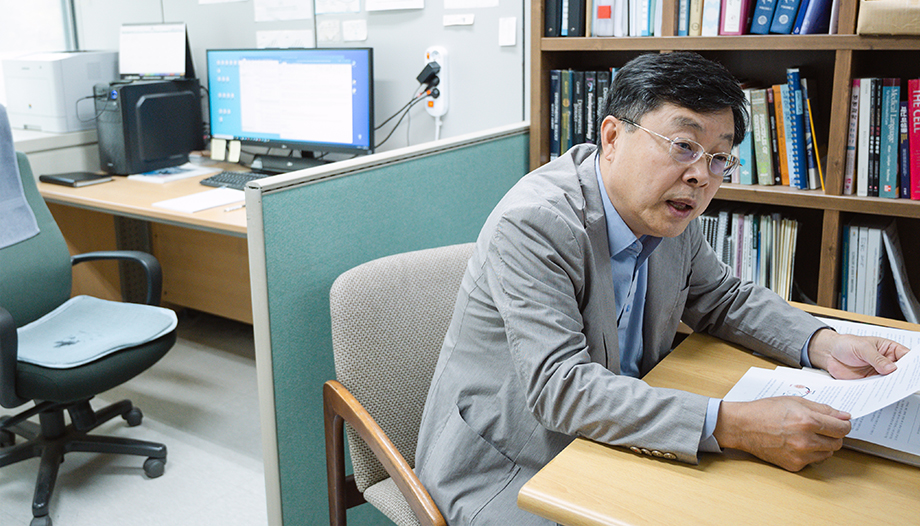 It is said that it took seven years to publish the paper ‘Identifying the phenomenon of hormone regulation of appetite-regulating hormones by substances secreted from cancer cells’ in the journal Nature Cell Biology. I submitted it to [Nature] in 2017, received a positive review, and resubmitted the thesis after conducting supplementary experiment for two years. Unfortunately, I received a notice of rejection. After that, several journals such as [Science] and [Cell] sent the notifications of rejection. After receiving a positive review by [Nature Cell Biology], it was finally published this year after supplementing experiments for another year. As I look back, I came up with the power of the basics, which was emphasized by Professor Yoo several times. Prof. Yoo's research team was able to withstand this past time because they believed in the power of the basics.

In the future, Professor Yoo plans to deepen the collaborative research conducted with the KIST Dementia Research Group along with follow-up research on this achievement. Collaborative research with the KIST Dementia Research Group has also achieved remarkable achievements over the past five years and has been approved for publication in [Nature Communications]. It is good to see another big achievement of the research team led by Professor Yoo.