The era of climate crisis, not the era of climate change. We live everyday while worrying about the collapse of human civilization. Following the declaration of carbon neutralization by major countries in the world, the Korean government announced ‘2050 Carbon Neutralization Implementation Strategy’ on December 7, 2020. Accordingly, many people pay attention to the science and technology community which is supposed to lead the technological innovation for carbon neutralization. Professor Jeong Gwang-deok of UST-KIST, who received Presidential Citation on the 54th Science and ICT Day has supported the realization of the national CO2 reduction target by conducting research in the area of Carbon Capture and Utilization (CCU) technology for 20 years. 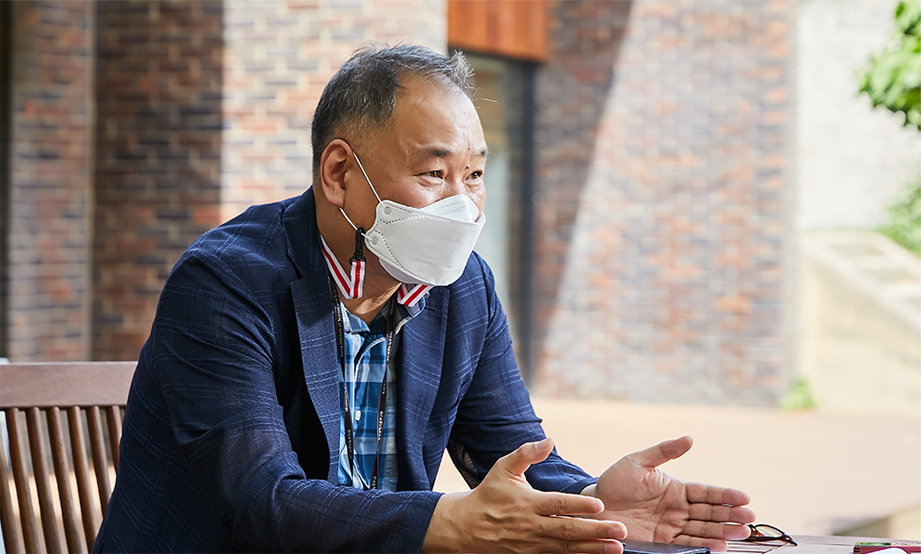 As the damage caused by the recent climate crisis has become severe, interest in carbon neutrality is growing. However, this discussion is not a new subject. The discussion about carbon dioxide started 30 years ago. At that time, Korea considered that the direction to deal with the issue was to find a new way to use carbon dioxide by converting it. This was the best option for Korea, where resources were absolutely scarce. Professor Jeong has been dedicating himself to the development of carbon dioxide conversion technology for 20 years.

“Life doesn't always go the way it was originally intended. I encountered the field of carbon dioxide conversion technology when I entered the C1 chemistry lab. Usually, R&D projects are decided by current issues. At that time, the issue of reducing carbon dioxide was newly emerged.”

Professor Jeong developed a methanol synthesis process (CAMERE-1) by hydrogenation of carbon dioxide in 2000 and conducted a pilot demonstration for the first time in Korea after conducting a study for a long time. In the late 2000s, he participated in the DME demonstration project of KOGAS and developed the CAMERE-2 process. This technology was transferred to a company, and Chairman of Volvo declared DME as a transportation fuel game changer in 2019, but commercialization as an automobile fuel has not yet been implemented. He said that electric vehicles and hydrogen cars are emerging as game changers for transportation fuel, and DME as a fuel is in a situation where it has to find a new direction with a different concept.

Carbon dioxide conversion requires hydrogen without carbon dioxide emission so he has conducted research on the thermochemical cycle to produce hydrogen by decomposing water, and research on mass production of hydrogen by decomposing water using a high-temperature reactor. However, Professor Jeong says that the key is to reduce carbon dioxide, secure economic feasibility, and develop technology that does not have negative public opinion on the technology and it is necessary to make a continuous effort to secure technology that meets this criteria from the long-term perspective.

“There are a lot of challenges in research. But we can't stop researching. We have to find what we can do and move forward, step by step.”

So, last year, KIST attracted the ‘Carbon to X Technology Development Research Group’ promoted by the Ministry of Science and ICT. The Carbon to X Technology Development Project Group aims to conduct research that contributes to the reduction of national greenhouse gas emissions by using carbon dioxide emitted to produce fuel for power generation and transportation, and chemical products. Professor Jeong is the head of this project group.

“The Carbon-to-X Technology Development Project Group has just been launched, but it is already paying off. Recently, it succeeded in developing a catalyst material and process for manufacturing formic acid from carbon dioxide and transferred the technology to a company. Formic acid is a type of fatty acid found in the body of ants and bees. It was usually used as a preservative and antibacterial agent for livestock feed, but it is likely to be used as fuel cells and fuel for driving small aircraft in the future. Korea has been dependent on import to secure necessary formic acid but we took a step closer to localization through the development of this technology.”

The Carbon to X Technology Development Project Group is said to be conducting research on producing biodegradable polymers and plastics using carbon dioxide in addition to formic acid. We look forward to seeing what kind of development will be made in the future by the project group led by Professor Jeong.

Before UST opened, KIST opened and operated a course called R&D Academy. Since then, Professor Jeong has devoted himself to nurturing future students.

“It is easy to neglect the academic aspect when performing development research at the government-sponsored research institute. So, I taught at the KIST R&D Academy and worked as a faculty at UST. By doing research and teaching at the same time, I always learn a lot and try to grow.”

Professor Jeong has produced a total of 7 graduates so far. 3 PhD graduates and 4 Master's graduates. Now he is guiding 5 students. Graduates are currently conducting research at prestigious institutions in Saudi Arabia and Pakistan. Professor Jeong maintains close cooperation with them and builds an international network for UST-KIST schools.

“Korea used to be a country that was supported by other countries in the past, but now it has grown into a country that supports other countries. Therefore, it is necessary to build a strong network by educating excellent students from countries with relatively poor research environment. This will greatly contribute to the internationalization of Korea in the future.”