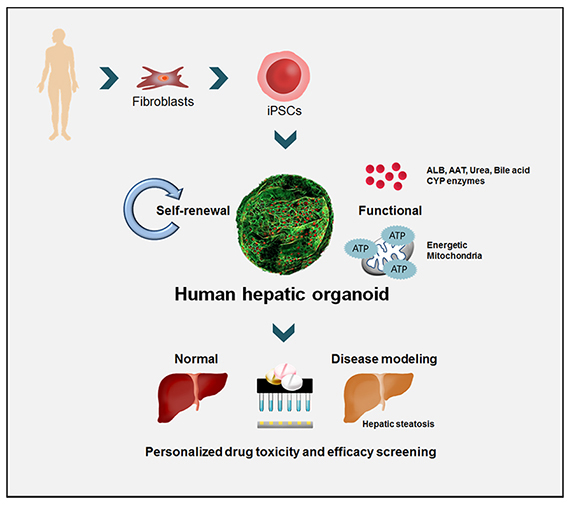 These results are particularly important due to the need for human models when assessing the toxicity and viability of new drugs during their development. This model is expected to fill in the gap between the capabilities of animal and clinical trials.

This study was supported by KRIBB's Big Issue Group, the Ministry of Science and ICT, the National Research Foundation of Korea's researcher support project, the Korea Bio Grand Challenge project, and the Ministry of Health and Welfare's disease recovery technology development project. On July 9, the details and results of this study were published in the online version of the Journal of Hepatology (IF 18.946), the world's leading liver research journal.

Although the liver is capable of regeneration, it is difficult to obtain liver tissue for testing new drugs and liver cells do not replicate outside of the body. Researchers from around the world have been working on solutions to these issues.

Hans Clevers from the Netherlands and Hideki Taniguchi from Japan are the leading researchers in studying the use of stem cells for developing hepatic cell models. The Clevers team faces numerous difficulties as he surgically obtains liver tissue and so can only harvest adult stem cells which mean that his studies are limited to differentiated cells. The Taniguchi team, like the KRIBB team, uses pluripotent stem cells, thus enabling the production of various cells, including blood vessel and immune cells. However, the Taniguchi liver model is a bundle of cells as opposed to the KRIBB team's organoid model. The cell bundles are unable to replicate and do not function the same as actual hepatic cells).

※ Organoids are three-dimensional cell cultures that are created using the self-organization capabilities of stem cells and mimic the appearance and functionality of human organ tissue.

The most notable result of this study is the fact that the KRIBB team's organoid model avoids the inability to replicate and poor functionality of other models. The KRIBB organoid model is capable of replication for extended periods of time outside of the body, can be successfully frozen and thawed, and exhibits a mature level of functionality. As a result, this model reacts to drugs in a similar way to actual human tissue, thus enabling a more accurate assessment of drug toxicity and viability. This model was used to create a fatty liver model, thus allowing researchers to use both healthy and unhealthy liver cells in the search for new treatments.

Dr. Son, the team's lead researcher, noted that there have been many drugs that showed no signs of toxicity during animal trials but caused severe complications and even death during clinical trials, resulting in significant suffering and cost only to be terminated. Dr. Son emphasized that research and development to improve the efficacy of new drugs is a product of how similar human hepatic organoid models are to actual human cells and whether they can be produced in large quantities. As such, Dr. Son has a positive outlook for the success of studies using the new KRIBB model, hoping to implement it in non-clinical trials to develop drugs more efficiently in the future.